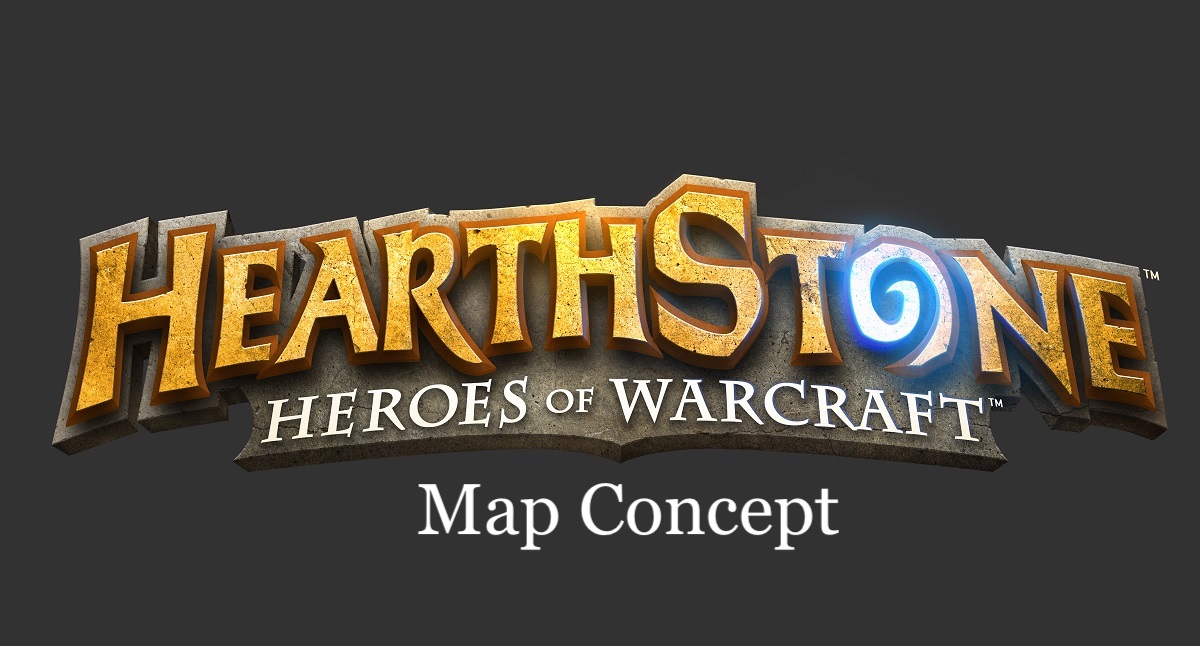 Gamer, podcaster, BBQ lover, I've been playing Heroes since the Closed Alpha.  I currently co-host Lords of the Storm, a Heroes podcast, as well as blog for Heroes Hearth.

Welcome to my fourth article in the Building a Battleground series. For this map concept I wanted to jump into Hearthstone, as it is currently one of the most underrepresented franchises specifically within Heroes of the Storm. This map concept attempts to marry several key Hearthstone elements with what will hopefully be a fun to play Heroes map, let’s dive in!

Setting: This map will take place on a standard Hearthstone Board looking map with two lanes. The map will have a random “theme” each time it loads, not altering the playing area, but altering all of the props and terrain graphics on the map, to emulate some of the various themed Hearthstone boards you might get while playing.

Gameplay: Hearthstone will be a medium sized map with curved lanes at the top and bottom of the map with a “jungle” type area and various terrain pieces in the middle, that holds some of the map’s mercenary camps. It will be a standard “destroy the core” type map, with the core taking the form of a floating avatar of one of the nine Hearthstone Heroes, randomized at map start (mainly for look and flavor, the avatar you get will not have any unique effects). In fact, randomness is a key feature of this map, but as this is a competitive game, you don’t want randomness in a way that could give the other team an advantage just because they are lucky. Instead, this map features what I call “Predictable Randomness”. This takes the form of variations from game to game, but variations which are telegraphed from the beginning, and which affect both teams (more on that below in the Summoning and Mercenary sections).

Objective: Hearthstone will have an objective that should be fairly familiar to fans of Infernal Shrines. One of three “Mana Portals” will open on designated spots in the middle area of the map, one slightly closer to each team’s side, and one in the very middle. The middle one will always be the first to spawn and then it will be randomized after that. Each of the three portals must spawn before the cycle can start again, and no portal will spawn twice in a row. Portal spawns, like other map objectives, will be signaled 30 seconds before the spawn. Each Mana Portal will spawn 10 Mana Elementals, 2-3 at a time. Mana Elementals will be closer to Khazra camps in strength than they are to other smaller objectives like the Infernal Shrines minions, or Haunted Mines skeletons. Each Mana Elemental will drop a mana crystal on death that can be picked up by walking over it, similar to the gems on Tomb of the Spider Queen. Each team can hold a maximum of five of these mana crystals. Any mana crystals taken beyond five will deny them to the enemy team.

Summoning: The amount of mana you get will determine your summon when the objective ends. Each summon will vary in ability and strength depending on what level of mana they were summoned with. There will be 2-3 minions that are summonable for each level of mana (mana levels 1-5, equaling 10-15 different minions total that could be summoned). The level 1-5 minions are the same for each team, are determined at the start of the map, and will stay the same throughout the maps duration. If a team collects no mana a generic zero mana minion will be spawned for them. The minion will spawn at the team’s core, as the avatar reaches down and places a “card” that the minion will spawn out of. The minion will then proceed to push down the enemy team's strongest lane. This could potentially end up with both team’s summon being in the opposite lane, or both being in the same lane depending on the situation.

Alternate Option: If 5 mana ended up being too much, you could easily change this to 6 Mana Elementals, with the top amount of summon capping at 3, and reducing the amount of summonable minions to 2-3 each of mana levels 1-3 (6-9 total minions).

Here are some examples of a few of the potential minions that could be summoned:

Mercenaries: There is one new type of mercenary in the Hearthstone map, the Deck Holder.

Deck Holder: There are four Deck Holder camps on the Hearthstone map, one closer to each team’s side in the middle, one above the top lane, and one below the bottom lane. Each camp has two rowdy Hearthstone players that you will have to “persuade” to settle down. Once you’ve done this, the camp will drop one of several spell cards that you can pick up and then use with your F key. The spells that will be available in a given game will be randomized at the start, but stay consistent throughout the game. The top and bottom camp will drop the same type of spell and the mid camps will drop the same type of spell.

Here are some examples of just a few potential spells that could be dropped:

Map: Below is a rough (very rough) design for lanes, mercenary camps, and objective spawn points. The actual layout of the Hearthstone Board would of course have to be modified for it to make sense from a lane standpoint and make it fair and even for both sides (so don’t read too much into the scale or where things are placed), with the avatars being placed on the East and West sides, instead of the North and South. You could also technically do a version of this map from North to South if you wanted, and the Volskaya Brawl is a great example of how that kind of layout could work. The main idea is to spread the lanes out a bit at the sides and bring them closer together in the middle, which could make for some interesting rotations. 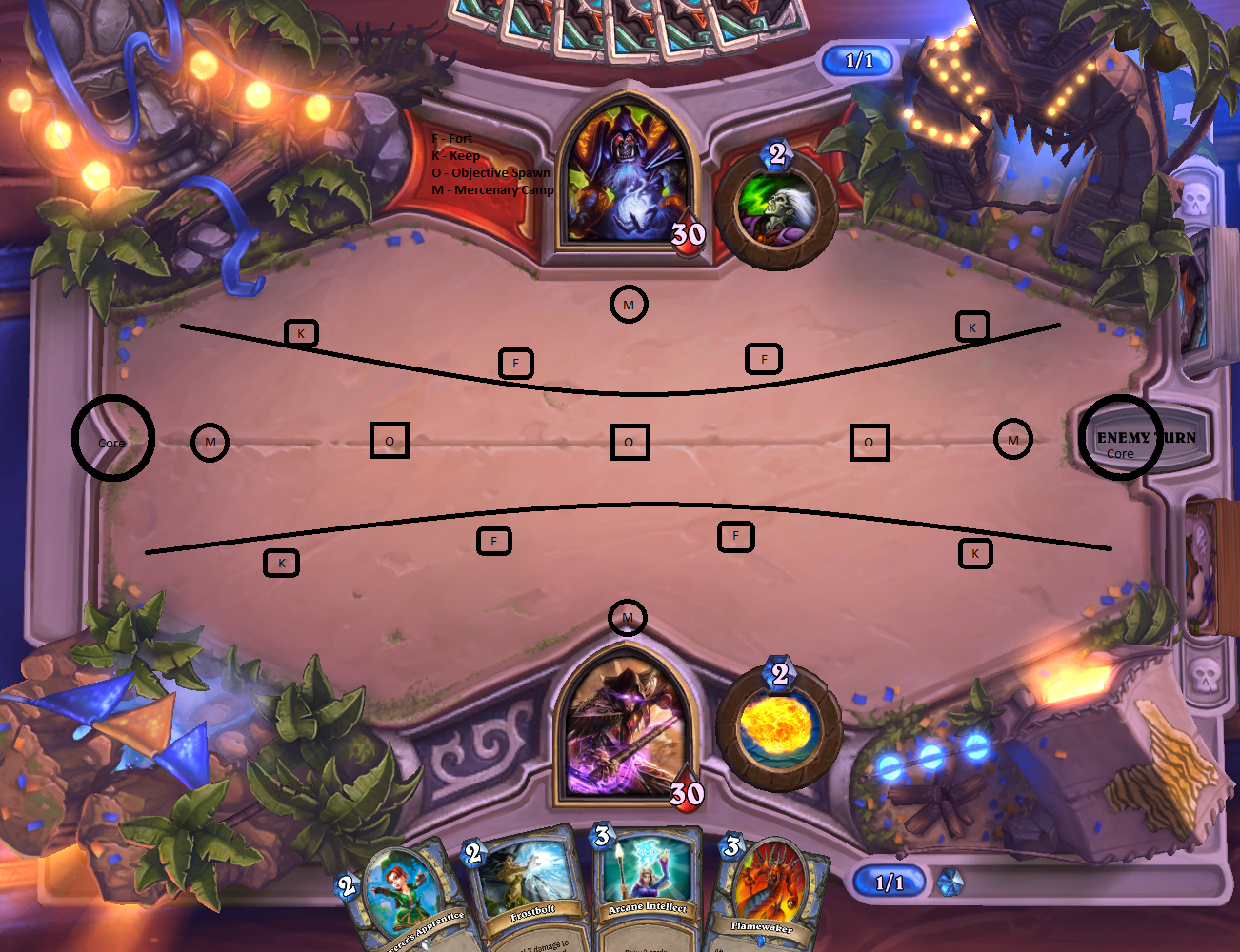 Loading Screen and Tool Tips: Due to the “Predictable Randomness” elements of this map, there also needs to be quick and easy was to disseminate the information on elements of the map that will be different from game to game. The first part of this would be the loading screen. During the loading screen, on top you would see the two different spells that were randomly chosen to be active for your current game and a short description of them. On the bottom of the loading screen you will see the five different minions that were randomly chosen to be active in your current game for mana levels 1-5 and a short description of them. In game your spells would of course have a tooltip when you hovered over your F key activatable. In the bottom right corner under the minimap you will see your current mana for the phase on each side (like Cursed Hollow Tribute counts) as “x/5”. If you hover over that UI element on either side, you will get a small popup that shows the five minions that were selected for this map with short descriptions of what they do, so you can be prepared for whatever summon you end up achieving and make decisions accordingly.

Strategy: Make sure to note the spells and minions that will be available for the map during the loading screen and at the beginning of the game, as it will be helpful in deciding how you want to approach the map, and in being prepared for the objective phase. The top and bottom lane start out somewhat further away, and then come closer together towards the middle. This can make for interesting rotation possibilities as solo laners will have to watch for ganks and the middle objective could be contested while still allowing for xp soak, depending on how the lane is pushed. During the objective, it will be to your team’s advantage to collect as mana crystals as possible, not only to make sure that you get a 5 mana minion summon, but to deny the enemy team a full summon as well. After the Summoning phase, you will have to decide situationally whether to push with the summon, or defend against the enemy summon. Though, depending which lane ends up being your strongest, you could see both team’s summons pushing down the same lane. Mercenary camps should also be prioritized based upon the spells that are active during the current map, as some spells may slightly benefit certain heroes more than others, and denying the camps to the opposing team could give you that extra edge in a teamfight.

Final Thoughts: As always, to wrap things up I just wanted to talk a little about map balance. You may have noticed that most things are somewhat vague, there aren’t a ton of numbers, etc, and that’s intentional. Without lots of testing, anything I put specifically could be argued on and picked apart endlessly. The point of this is to provide a tight framework, that once created, could have numbers plugged into it and then be tweaked as needed.

I hope you’ve enjoyed my Hearthstone map concept and as always I’d love to hear feedback in the comments below. If you want to see some of my other map concept work you can check out my Arathi Basin Concept and Stormwind Assault Concept here on HeroesHearth as well!